Retired agent William “Bill” Plunkett served in the FBI for 27 years. During his FBI career, he was assigned to the joint Counterintelligence operations with the Central Intelligence Agency and investigated National Security and Cybercrime matters. In this episode of FBI Retired Case File Review, Bill Plunkett reviews the 1929 Bureau of Investigation case featuring the mysterious death of Virginia McPherson; attractive young nurse found semi-nude in her apartment with a pajama cord around her neck. The case was initially investigated by the Washington D.C. Metropolitan Police, but after a public outcry when Virginia’s death was ruled a suicide, Director Hoover’s  G-Men were asked to step in and re-do the investigation.

During his FBI career, Bill worked in the Albany Division, the Cincinnati Division, and the Washington Field Office in D.C. He was an original member of the Cincinnati FBI Joint Terrorism Task Force, formed after 9/11. He is the author of two true crime books that take place in the early days of the FBI, known initially as the Bureau of Investigations. In The G-Men and the Nurse, his second book, Bill recounts the story of the Virginia McPherson case. His first book was titled The G-Man and the Diamond King.

“The Bureau of Investigation, precursor for the FBI, was brought in to take a second look at the case which was already weeks old and the crime scene had been dismantled.”

Here are links to a newspaper articles from 1929 documenting the public’s curiosity about the death of Virginia McPherson: 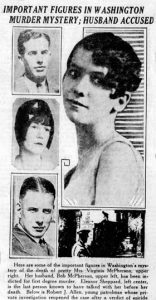