Recap:  When a controversial senior leader from Egypt comes to New York for a heart transplant, OA struggles to balance his personal opinion with his professional duty when he is assigned to the security detail.

It is not my intention to suck the fun out of watching FBI. However, I believe it’s important for the show to accurately present how the Bureau functions. In my opinion, FBI is better than the majority of the law enforcement and first responder dramas currently airing on TV. The FBI characters seem genuine and have emotional responses to the sometimes dangerous demands of their jobs. They aren’t perfect. They have flaws just like the real men and women of the FBI. I like Maggie, OA, Jubal, Kristen, and Dana, and what they represent. Fidelity. Bravery. Integrity.

However, while watching this week’s episode where OA is assigned to the protective detail of a foreign dignitary in the U.S. for medical treatment, I immediately noted the premise was implausible (and that OA’s actions at the end of the episode were not a good look for the character). For the first time since the series began, I was disappointed with the storyline. It felt far-fetched.

Since I wasn’t 100 percent sure about what role, if any, the FBI played in the personal protective detail of a foreign dignitary, I first consulted the internet, and then I consulted an FBI friend. 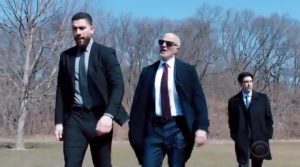 Next, I contacted retired agent Lauren Anderson and asked her what she thought. Coincidentally, she was watching the episode. Here’s what Lauren told me:

“The FBI would not play a primary role in the protection of a foreign dignitary. If the dignitary is a head of state or head of government, he or she will travel with his/her own detail but could coordinate with Secret Service regarding any meetings with POTUS, VPOTUS or FLOTUS. If it’s a cabinet-level official, or a minister, Diplomatic Security within the State Department could also provide support while in the US. In addition, perimeter security, depending on the city, could be supplemented by local police department such as NYPD. The best example I can share is what happens during the UN General assembly (UNGA) each September. The role of the FBI is one of overall coordination with State department, NYPD, Secret Service, DHS, etc. As it pertains to POTUS travel to UNGA, Secret Service clearly has the lead. Separate from UNGA, if let’s say the French President, Emmanuel Macron, traveled to the United States, he would have his own protective detail. The FBI would have no role whatsoever in terms of his protection. The bottom line is, absent unusual circumstances, the FBI would not provide any protective detail as set forth in the storyline of the FBI episode 20 – regardless of the circumstances, including personal travel. The FBI would be asked to provide/share intelligence information that may pertain to the safety and security of the dignitary.”

One last party-pooper comment. The bomb tech’s superhero-like handling of the IED was mindboggling. No evacuation of the hospital? Her FBI training should have had her clearing the area, using bomb detection canines, putting on protective gear, and utilizing remote equipment before attempting to render safe the device. To learn how a real FBI Bomb Tech would handle a bomb crime scene, listen to FBI Retired Case File Review Episode 086: Kevin Miles – Master Bomb Technician, Khobar Towers Attack.

Why am I so serious about a TV show providing accurate information about the FBI? It’s only a TV show. Why does it matter? Because most audience members will never meet an agent in real life. They learn about the FBI and law enforcement in general from watching their favorite crime shows. Using creative license to increase the entertainment value is understandable, but things get shaky when FBI roles and responsibilities are totally fabricated.

I’ll be back next week, keeping it real.