Recap:  An American diplomat is killed while being used as a pawn in a dangerous drug ring, and the team must work together to bring them down. Also, Jubal and OA try to help friends from their past fight off their inner demons.

I watched and planned to write a complete review of this week’s episode. I especially wanted to address the fact that Maggie shot and killed a bad guy, and then immediately returned to work as if nothing had happened. No one investigated the shooting to determine if it was justified, no one confiscated her weapon, no one interviewed witnesses, and Maggie wasn’t given any time off to “process” the shooting. Remember, I always remind you that murder in an FBI case is also a local homicide. In real life, both the FBI and the NYPD would have conducted a thorough evaluation of this deadly shooting incident. 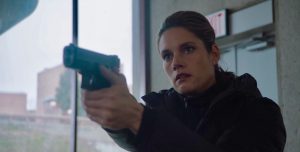 Unfortunately, I got behind schedule and will be flying out of town in the morning. So, to save time I’m going to, instead, share a section from my soon-to-be-released book, FBI Myths And Misconceptions: A Manual for Armchair Detectives regarding what happens when agents are involved in a shooting incident:

All FBI shooting incidents, even the accidental discharge of a weapon by an agent, are investigated and reviewed. When a weapon is fired in a situation involving a criminal matter, a shooting incident review group is deployed to where the shooting occurred, and factual information is gathered to determine if the agent involved was operating within the scope of the FBI’s deadly force policy and in accordance with FBI training and procedures. Agents are permitted to fire their weapons only if they have a reasonable belief that a situation presents an imminent danger of death or serious bodily injury to themselves or others. If the incident resulted in injuries or fatalities,  this review is made with the cooperation and assistance of local law enforcement to determine further if any local or state laws were violated.

As in the case of any other type of investigation, all employees, personnel, and witnesses at the scene are identified and interviewed regarding the incident. Investigators also look for safety and training issues that may be revealed during their inquiry. The completed report is reviewed independently by a Shooting Incident Review Group (SIRG), within the Bureau’s Inspection Division, to analyze and evaluate the application of deadly force in such incidents.