Recap:  After a decorated FBI agent is murdered, the team investigates and uncovers the man led a double life. Also, Maggie struggles with what information she should reveal to the agent’s widow, who is also her personal friend.

I enjoyed this week’s episode. It was another emotion filled storyline that has FBI standing out from all the other network cop shows. There were a few issues, but this episode gets a thumbs up from me.

The plot featured the death of SA Greg Kennedy who was conducting surveillance of a motorcycle gang’s club. Initially, Maggie and OA have no idea who killed Agent Kennedy or why. His death was assumed to be the result of an adversarial confrontation with one of the subjects of his investigation. But which one?

When an agent or police officer is killed in the line of duty, all law enforcement officers feel the pain, feel the loss. Although well-trained and equipped, agents accept the incumbent risks of protecting the public. Fortunately, most have never fired their weapons in an adversarial situation. After more than 110 years of service, the FBI currently honors thirty-six special agents who have died in the line of duty as the result of a direct confrontation or by the hand of an adversary. These service martyrs are memorialized in the Wall of Honor tributes on the FBI website, at FBI Headquarters, the FBI Academy, and their respective field offices. Their ultimate sacrifice will always be remembered. I’ve attended the funerals and visited the gravesites of three of the FBI’s thirty-six service martyrs. Attending theirs and funerals for local and state police officers killed in the line of duty has been a stark reminder of the magnitude of the oath of service every law enforcement officer is sworn to uphold. 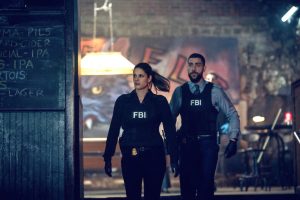 Safety is always the goal, but accessing the threat is complicated. When Maggie and OA saw the weapon tucked into the gang leader Ramirez’s waistline, was that enough reason for them to draw their weapons? I’m sure others will argue with me that it was. It’s a tough call that would only matter if shots had been fired. Would the agents have been able to articulate how, at the time, they feared for their lives or the lives of others?

In this and previous episodes, Maggie and OA often burst into residences and businesses without a warrant. Agents investigating the murder of a colleague would, no doubt, be emotionally affected by the loss, but would also be extra vigilant in following FBI procedures and protocols to ensure an air-tight investigation and prosecution. Conducting arrests and search without proper warrants supported by probable cause is the fastest way to get evidence thrown out of court and risk a criminal being acquitted. Even when obtaining consent from a property owner is an option, having a judge authorize entry is the prudent thing to do. I understand the time constraints involved in showing on-screen Maggie and OA obtaining these essential documents; I’m just saying. . .

Going through the process also allows time to plan the execution of the warrant, the most common circumstance for danger. That’s why preparation is paramount to all FBI tactical operations. During many FBI scenarios, there seems to be no rhyme or reason for when OA and Maggie call on SWAT. Arrests are complex and sometimes volatile operations and require that all possible outcomes be considered and anticipated. In the real world, case agents draft a written contingency action plan based on Bureau Standard Operation Policies (SOP) or guidelines for the execution of arrests and searches. This document, which lays out detailed information concerning the subjects and the location, including available medical facilities nearby, is reviewed and approved by field office management before execution. The plan’s purpose is to address possible safety and accountability concerns. However, there are factors that can never truly be predicted, primarily and foremost, the independent reactions of the subjects and individuals at the scene. I know it’s unrealistic to expect to see the planning stages for arrests and searches during a less-than-an-hour TV program; but again, I’m just saying. . .

(Spoiler Alert) At the conclusion of the show, we learn that SA Kennedy was killed during a revenge plot to stop him from revealing a high-powered attorney’s involvement in an illegal drug enterprise. A frequent storyline for books, TV shows, and movies is a bad guy setting up a scheme to exact revenge upon the agent who was responsible for sending them to prison. The FBI is very cautious about protecting its agents from harm, but such threats and retaliatory murders are rare. In most instances, subjects understand that agents are just doing their job.

The episode ended with a cliff hanger that promises to solve the mystery of the season. Why was Maggie’s husband killed? I can’t wait to learn the truth, but I’ll also be sad to close out my review posts. After next week’s finale, what will I do on Tuesday nights?

(Disclaimer: If you are watching FBI CBS simply to be entertained, don’t read this review. I’m here to educate and provide a reality check for those who want to learn about the real FBI. My reality checks should not be confused with criticism. I like this show and believe that it’s a powerful promo for the real FBI. I’m excited that a new generation is watching and perhaps deciding they want to be FBI agents when they grow up. Attempting to create an accurate portrayal of an FBI investigation is an impossible task if the investigation must be solved within less than an hour. Corners must be cut, and creative license must be used to move matters along quickly. I get it. I really do. However, to counteract the “CSI Effect” this sometimes creates, I’m going to, respectfully, point out a few issues.)