Retired Supervisory Special Agent Jim Wedick served in the FBI for nearly 35 years. In this episode of FBI Retired Case File Review, Jim talks about his assignment as an undercover agent in the Bureau’s very first long-term undercover investigation. The case,  Major Case 1, was captioned OPFOPEN – short for Operation Fountain Pen.  The investigation marked a significant shift in FBI priorities and the first time the Bureau operated a sophisticated attack on organized crime networks, financial criminals and con-men using White-Collar Crime violations to prosecute off shore criminal enterprises. Operation Fountain Pen and Jim Wedick are the subjects of a new book by David Howard, Chasing Phil: The Adventures of Two Undercover Agents with the World’s Most Charming Con Man. The book has been optioned for a feature film. Jim mentions several other notable cases, including bribery case, – dubbed by the California media as “Shrimp Scam” – for which he received the Director’s Award in 1994 and a large Health Care Fraud case he supervised. We acknowledge his wife, retired special agent Nancy Wedick, who teamed up with his on several successful cases. Jim Wedick operates FBIRetired.com – the only on-line directory made available to the general public featuring “retired” FBI AGENTS / ANALYSTS interested in showcasing their skills to secure business opportunities. 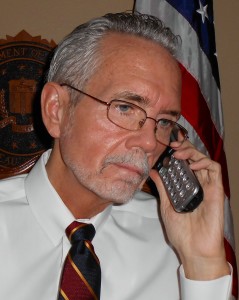 King of Scam Royally Conned Pigeons Until FBI Caged Him

Con Man Gets Stung at His Own Game_