Review:  The opening scene of Episode 8 was ripped from the headlines. A U.S. resident, a Russian chemist instead if a Saudi journalist, visits his consulate to make arrangements for a visa for a loved one and is attacked by his countrymen. In the FBI plot, the person is kidnapped, and the FBI is called into action to investigate and rescue the victim. In the real-life scenario, the horrific outcome evoked international outrage and condemnation.

FBI continues to be more than an action show by presenting the main characters with moral issues such as the one faced by OA as he struggled with saving the life of the Russian chemist he believed was responsible for the deaths of many. As is the case with real FBI agents, he puts aside his personal feelings and opinions to do his job. With straightforward honesty mixed with playful banter, Maggie helps OA get there. FBI Episode 8 is another solid episode with introspective moments of empathy, along with climactic moments full of action and conflict — good stuff.

Some of the most exciting moments occurred during the standoff at the compound of a sovereign citizen militia group. A plan is formulated, but as we know from the Waco and Freeman sieges, these plans never seemed to work out the way they were  choreographed back in the office. Once again, Maggie and OA tag along with the SWAT team to apprehend dangerous heavily-armed criminals while wearing their good-looking, tight-fitting, ballistic vests and carrying handguns. If they refused to stay back and let SWAT handle these things, can the team at least loan Maggie and OA some helmets and camos? And, if they’re going to borrow items from SWAT, how about an M4 rifle for both, so they have the same firepower as the highly trained team. 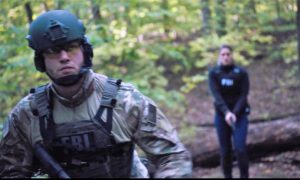 As noted, Maggie has played a wannabe SWAT operator in previous episodes, but this time she also got to try her hand at being a hostage negotiator. Although the goal of crisis negotiations is to stall for time, Maggie negotiated for about a minute. I understand that it’s impossible for productive prolong talks—during which rapport with subjects is established, additional intelligence is gathered, and operational plans are updated—when the TV show format demands that matters be wrapped up quickly. Fortunately, an invisible shield protected her as she rushed the building and kicked in a door to rescue the children inside. In FBI Retired Case File Review Episode 083: Gary Noesner – Crisis/Hostage Negotiations, Stalling for Time you can learn how a real hostage negotiator would have handled this situation.

The episode ends with a suspenseful closing scene between SAC Dana Mosier and her Russian counterpart and hints of a followup episode regarding the Russian story line and her time in Moscow. I’m assuming her character was assigned as the Legal Attaché (LEGAT) or Assistant Legal Attaché (ALAT)  in the FBI’s Moscow Office where she would have coordinated the investigative leads and requests of the FBI in the United States with Russian police and security personnel. To learn more about the FBI in Moscow listen to Episode 141: Bill Kinane – FBI in Moscow, First Russian LEGAT.

(Disclaimer: If you are watching FBI simply to be entertained, don’t read this review. I’m here to educate and provide a reality check for those who want to learn about the real FBI. My reality checks should not be confused with criticism. I want to like this show and believe that it’s a powerful promo for the real FBI, something that is needed at this time. I’m excited that a new generation is watching and deciding they want to be FBI agents when they grow up. Attempting to create an accurate portrayal of an FBI investigation is an impossible task if the investigation must be solved within less than an hour. Corners must be cut, and creative license must be used to move matters along quickly. I get it. I really do. However, to counteract the “CSI Effect” this sometimes creates, I’m going to, respectfully, point out a few issues.)