Recap:  After a key witness and a U.S. marshal are ambushed and killed, Maggie and OA must track down a man who leaked the information that led to their murders.

Review:  I have a confession. My knowledge regarding the Witness Protection Program, also known as WITSEC (Witness Security), comes from the same TV shows and movies everyone else has seen. FBI discussions regarding WITSEC are on a “need to know” level, and I guess I never needed to know. So, when it comes to reviewing the accuracy of the portrayal of the witness protection procedures in this week’s FBI episode, I’m going to have to pass.

For educational purposes, I made a few reality check notes on other scenes:

The FBI would be responsible for investigating the murders of a federal witness and law enforcement officer. However, the crime scene from a shootout with multiple fatalities would be coordinated with the local police and first responders. I was pleased to at least see the presence of marked vehicles from the Yonkers Police Department at the crime scene. 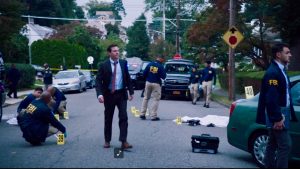 In real life, agents attempting to arrest a gang member suspected of gunning down several people, including innocent bystanders, would never approach him “to talk” while in the presence of other members. If this type of bold daytime approach were necessary, then this would be an appropriate time for Maggie and OA to call for SWAT. Maggie confronting, by herself, an armed suspect and chasing him through buildings and alleyways goes against all logical law enforcement tactics and arrest procedures.

A magistrate signs off on arrest and search warrants based on probable cause presented in an affidavit. A statement from one bad guy about another bad guy is not adequate probable cause. Plus, statements obtained from a subject in custody based on promises made to him could be deemed inadmissible. Note, where a prisoner will serve his time is up to the Bureau of Prison, not the FBI.

OA removed a GPS tracking device from a car with his bare hands, reducing the possibility of locating the fingerprints of the person who installed it.

There were the usual issues, the computer search with instantaneous results regarding the most intimate details about a subject’s life, past and present; the SAC actively involved in the investigation; and, of course, my primary pet peeve, Maggie and OA tagging along with SWAT. I have a suggestion. Why not have them become SWAT operators? SWAT is a collateral duty for the FBI agents in the field, meaning team members maintain a full investigative caseload on their respective squads and are on standby for when SWAT team is deployed. Maggie and OA should try out and train with SWAT,  especially if Maggie plans to chase bad guys all by herself. Plus, they would be issued all of that cool SWAT gear.

(Disclaimer: If you are watching FBI simply to be entertained, don’t read this review. I’m here to educate and provide a reality check for those who want to learn about the real FBI. My reality checks should not be confused with criticism. I want to like this show and believe that it’s a powerful promo for the real FBI. I’m excited that a new generation is watching and perhaps deciding they want to be FBI agents when they grow up. Attempting to create an accurate portrayal of an FBI investigation is an impossible task if the investigation must be solved within less than an hour. Corners must be cut, and creative license must be used to move matters along quickly. I get it. I really do. However, to counteract the “CSI Effect” this sometimes creates, I’m going to, respectfully, point out a few issues.)