Retired agent Herbert Cousins, Jr. served in the FBI for nearly 22 years. He retired as the Special Agent in Charge of the Springfield Division in Illinois. In this episode of FBI Retired Case File Review, he reviews his investigation of self-proclaimed black messiah and cult leader Hulon Mitchell Jr., also known as Yahweh Ben Yahweh, who led the Florida-based Nation of Yahweh Temple. The Nation of Yahweh was a religious cult founded on the teachings of black separatism and supremacy. On the instructions of Yahweh Ben Yahweh, members of the cult’s violent inner circle committed numerous murders of cult defectors and random racial killings of whites. Yahweh and several of his followers were charged and convicted under the Racketeer Influenced and Corrupt Organizations Act (RICO), with predicated violations of murder, attempted murder, arson, and extortion. During his Bureau career, Herbert Cousins specialized in counterterrorism, counterintelligence, and criminal and security matters. After retiring from the FBI, he served for a period of time as the Inspector General for the Miami-Dade County Public Schools, the fourth largest school district in the United States. Currently, Herbert Cousins is the owner of Cousins & Associate, an agency that provides private corporate security consulting, investigation, and litigation support on a national and international level. 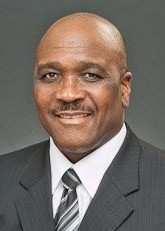 The following links are to a video of an FBI Files episode and newspaper articles about the Yahweh Temple of Love and its leader Yahweh Ben Yahweh:

Daily Mail – 1/28/2017:  Chilling images inside the ‘church’ of a murderous black supremacy cult