Retired agent Scott Duffey served in the FBI for 22 years. For the majority of his career, he was assigned to the Wilmington Resident Agency out of the Baltimore Division where he worked violent crime matters and was later promoted to a supervisory special agent. In this episode of FBI Retired Case File Review, Scott reviews his years-long investigation of what started out as a rumor that Thomas Gibison had whispered to high school classmates while attending his senior prom. He and a friend claimed that their new spider web tattoos were symbols of their allegiance to white-supremacist Skinhead dogma and were “earned” by them shooting a black man. This nearly 2-decade-old racially motivated homicide was tenaciously pursued by Scott Duffey and his partner ATF special agent Terrance Mortimer, with the assistance of the Philadelphia Police Department Thomas Gibison was successfully convicted of conspiracy to commit murder, ethnic intimidation, and firearms violations.

Scott Duffey served as the coordinator of the FBI’s Delaware Violent Crimes Task Force  from 1999 through 2011. Prior to joining the Bureau, he was a Lower Merion Township Police Officer. With a B.A. in Classical Languages and a Masters in Administration of Justice, Scott Duffey currently serves as the Associate Director of the Criminal Justice Institute for Wilmington University. 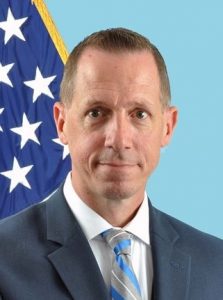 “We weren’t going to stop until justice was served for this unknown individual who was shot on the streets of Philadelphia for nothing more than the color of his skin.”  —  Retired Agent Scott Duffey

The following links are to newspaper articles about the investigation and conviction of Thomas Gibison for the racially motivated murder of an unknown African American male in the spring of 1989:

Philadelphia Daily News – 8/26/2008:  Acquitted in killing, he gets max for conspiracy