Retired agent Russell Atkinson served with the FBI for 25 years. He specialized in investigating high-technology and intellectual property crimes in Silicon Valley and served as a legal adviser. In this episode of FBI Retired Case File Review, Russell Atkinson reviews the first trade secret theft prosecution in California under the federal Economic Espionage Act of 1996. The case centered on the theft of radiological device technology and encrypted materials by David Kerns, the former employee of a Silicon Valley tech firm.  On January 13, 2000 David Kern pleaded guilty to one count of trade secret theft. He was sentenced on April 4, 2000 to a year and a day in federal prison.

After retiring from the FBI, Russ Atkinson, with degrees in mathematics and law, practiced law and also worked for many high-tech firms in the computer industry including IBM, Fairchild Semiconductor, and AOL. Now retired, he spends time writing crime fiction and is the author of eight mystery novels. His book, Fatal Dose is a fictionalized account of the theft and misuse of X-ray technology inspired by this case. He warns that after reading Fatal Dose you’ll never look at an X-ray machine the same way. You can learn more about Russell Atkinson and his books at his website Cliff Knowles Mysteries. 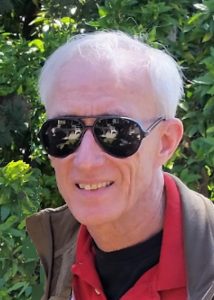 “Aware that technology was the key to who was going to have economic and political power and that trade secret theft was weakening America’s position, Congress passed the Economic Espionage Act of 1996.” —Retired Agent Russell Atkinson