(Disclaimer: If you are watching FBI simply to be entertained, don’t read this review. I’m here to educate and provide a reality check for those who want to learn about the real FBI.)

Recap:  Special Agent Maggie Bell, Special Agent OA Zidan, and the team investigate the murders of 18 young women with help from a survivor associated with the deceased.

Review:  Here’s where they got it right, got it wrong, or where creative license was used. Where applicable, I’ll note the 20 FBI Clichés Reality Checklist number:

This episode started off with a bang. By the way, I jumped when the bloodied victim appeared out of nowhere. It was almost as disturbing as the teenage girl’s pink outfit. Good looking out, dad!

The next scene took us to a mass burial site. When the FBI enters a murder investigation, there must be a federal violation in play. However, when the bodies are initially located there is nothing to indicate FBI jurisdiction, such as the victims had been or were suspected of having been transported across state lines. (#19) Based on the close working relationship between the FBI and their local law enforcement partners, the FBI, most likely, would have been notified and invited to the crime scene. But they would not have been the lead agency, and the FBI Evidence Response Team would not have processed the crime scene unless FBI assistance was requested because the local police agency lacked the proper equipment and/or expertise to do the job.

I waited until this week to bring up an observation that was bothering me, and guess what? It was corrected. Maggie is now wearing a jacket. Last week, with her wardrobe of t-shirts and skinny jeans, I was perplexed about where she was carrying her gun and was pleased to see that in episode 3 she’s properly attired. I want Maggie Bell to be a powerful representative for female agents. OA is dressed with authority in a suit and tie. I’d like to see Maggie step up her game. She’s the only female FBI agent most viewers will ever get a chance to meet. 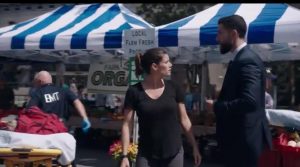 Supervisory Special Agent Jubal Valentine. I love him. I know him. I used to work for him. Jubal has all the right personality traits to be an FBI supervisor, focused and funny. However, when he yells out, “The JOC is hot, people,” there’s a problem. It’s not a JOC. A Joint Operation Center is stood up during major events, such as the Superbowl or when the Pope comes to visit your city (the last time I was in a JOC). Every local, state, and federal agency that could potentially be required to respond to a crisis event is in the room, sharing information and intelligence. Also, when Jubal said, “ You don’t have to go home, but you can’t stay here people,” I assumed he was joking. I’ve never heard an FBI supervisor tell anyone to go home. LOL. Once, when I was leaving the office at 4:30, my supervisor called me out in front of the whole squad. “Hey Williams, what’s up? You only working a half day today?” Funny, very funny. (#9)

That brings up another observation. FBI agents are assigned to squads based on related federal violations. Most squads have 10 to 20 agents working under one supervisor (SSA). So far, Maggie and OA have investigated violent drug gangs, bombings, hate crime, terrorism, serial murders, and human trafficking. What squad are they on? That’s a rhetorical question. I understand to keep the episodes varied and fresh our duo will see plenty of action.

Last observation. Maggie and OA are competent agents, but no SWAT team leader would allow them to breach a building alongside a highly trained and skilled tactical unit. SWAT is not called out on most arrest and searches, only on those where the potential of danger is high (or higher than usual). In real life, Maggie and OA would have allowed this elite team of agents do what they do best and waited to enter the arrest site after the building was cleared.

Another good episode. My reality checks should not be confused with criticism. I like this show and believe that it’s free advertising for the real FBI, something that is definitely needed at this time. I’m excited that a new generation is watching and deciding they want to be FBI agents when they grow up. Attempting to create an accurate portrayal of an FBI investigation is an impossible task if the investigation must be solved within less than an hour. Corners must be cut, and creative license must be used to move matters along quickly. I get it. I really do. However, to counteract the “CSI Effect” this sometimes creates, I’m going to, respectfully, point out a few issues.