(Disclaimer A: If you are watching FBI simply to be entertained, don’t read this review. I’m here to educate and provide a reality check for those who want to learn about the real FBI.)

Recap:  As the body count continues to rise, Maggie Bell and OA Zidan rush to track down an active sniper who has an elusive motive.

Review:  Here’s where they got it right, got it wrong, or where creative license was used. Where applicable, I’ll note the 20 FBI Clichés Reality Checklist number:

Although I have reviewed many featured films for FBI clichés and misconceptions, I seldom attempt to review TV shows. Most are so over-the-top with FBI agents using technology that belongs in a science fiction show not a police drama or agents are doing things that should get them thrown in jail. As previously noted, the solved-in-less-than-an-hour time constraints makes it difficult to for realistic portrayals. FBI CBS is one of the few police dramas that make a concerted effort to be accurate or as close to accurate as possible. Nevertheless, to date, federal jurisdiction has been a problem in all episodes. The FBI is authorized to investigate more than 200 violations of federal law. However, when it comes to the murders that have been frequently featured on FBI CBS, the FBI’s investigative jurisdiction is limited. In most circumstances a request for FBI assistance by an appropriate state official is required, even to pursue a serial killer.

In episode 4, initially, the murder of the Assistant United States Attorney (AUSA) appeared to fall under FBI investigative jurisdiction in that the FBI is responsible for investigating threats made against federal prosecutors. The shootings that take place in the opening segment were also local violations with multiple victims, dictating a joint NYPD and FBI investigation. However, later in the episode, we learn that the AUSA was a random shooting victim and not targeted based on his position, which means no federal jurisdiction. By the way, the show’s premise reminded me of the DC Sniper case were the sniper also had a teen accomplice. I would love to interview the case agent of that investigation on the podcast. 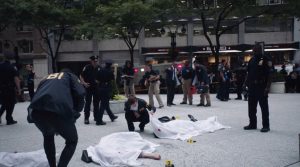 Let’s review the expanded version of FBI Reality Checklist #19 – FBI agents investigate murders. Yes, but only under special circumstances. Usually, if the FBI is investigating a murder case, there is another crime, a federal violation also in play. Such as a hate crime, where the homicide violated the victim’s constitutional and civil rights, or when a teller or security guard is murdered during the robbery of a federally insured bank, or the victim is killed during a kidnapping where the victim was taken across state lines. The FBI authorization to investigate a murder is most clear under the following circumstances; when the homicide occurs on federal property or an Indian reservation, and under Special Maritime or Territorial Jurisdiction when the murder occurs on board a U.S. Navy or U.S. Merchant Marine ship in international waters or on U.S. military bases worldwide. During state and local murder investigations, an “Unlawful Flight to Avoid Prosecution” or UFAP warrant can be issued, and the Bureau can enter the case. Technically, however, the investigation of the actual murder is not the Bureau’s task, just the apprehension of the interstate fugitive suspect and the murder suspect once located and arrested is tried in state court.

I hope that future episodes will showcase investigations were the FBI is accurately shown as the lead investigative agency or were Maggie and OA work their cases with the assistance and cooperation of the NYPD and other local, state, and federal agencies. In these instances, where the FBI shares joint jurisdiction, the investigation would be worked in partnership. It needs to be stated that the NYPD has the largest Police Department in the United States and the resources and manpower available to the NYPD are substantial. FBI CBS has unintentionally perpetuated the cliché that the FBI has hierarchical authority over local and state agencies. That’s not accurate. State and local law enforcement agencies are not subordinate to the FBI. If an FBI agent walked up to an NYPD crime scene and flashed his credentials in the face of an officer manning the yellow tape, the agent would remain behind the yellow tape until a police on-scene commander was notified. The FBI’s relationship with other law enforcement agencies has been built on years of mutual respect and collaboration. (#2) I wish there was a re-occurring character on the show representing the NYPD who worked in the FBI space and on the street with Maggie and OA. This would highlight the true relationship between the FBI and the NYPD. And since I started a wish list, how about a AUSA character too.

My last observation addresses the SWAT team once again. In the sniper situation, Maggie and OA would not have been up on the roof, literally, calling the shots. A highly trained and skilled tactical team leader would have made the call to use deadly force. Yes, I understand the need to put Maggie and OA in the center of the action. If that’s the case, why use the SWAT team?

The very best thing about this show is the honest emotional connection the agents express for the subjects, victims, and witnesses involved in their investigations. That’s an aspect of the FBI and its agents rarely shown. Kudos.

(Disclaimer B: My reality checks should not be confused with criticism. I like this show and believe that it’s free advertising for the real FBI, something that is definitely needed at this time. I’m excited that a new generation is watching and deciding they want to be FBI agents when they grow up. Attempting to create an accurate portrayal of an FBI investigation is an impossible task if the investigation must be solved within less than an hour. Corners must be cut, and creative license must be used to move matters along quickly. I get it. I really do. However, to counteract the “CSI Effect” this sometimes creates, I’m going to, respectfully, point out a few issues.)