Recap:  A woman with information about the death of Maggie’s husband is abducted, leading the team to uncover a criminal operation larger than anyone imagined. Also, Dana puts her career in jeopardy by standing by and allowing Maggie to work on the case, which has such a personal connection to her.

When I heard that Dick Wolf and the team behind the Law & Order franchise had a show about the FBI on the schedule, I knew I had found the ideal research subject. I had just begun writing a nonfiction book addressing clichés about the FBI in books, TV, and movies. Previously, it had been difficult to watch most cop shows without wanting to take off my shoe and throw it at the TV. FBI has been my faithful companion while I was writing FBI Myths and Misconceptions: A Manual for Armchair Detectives (anticipated release June 27).  So before I begin my review of the season finale, I want to say thank you to the FBI writers, producers, and actors. The scripts were tight, the production value high, and the acting superb. It’s been a pleasure hanging out with the FBI crew and fans on Tuesday nights. I miss you guys already.

Okay, that’s enough pleasantries. Let’s get down to business.

This week’s episode featured another emotionally charged storyline. Everyone wanted Maggie to get the answers she sought regarding who killed her husband. SAC Dana and ASAC Jubal, against their better judgment, allowed her to work the case but cautioned her to be careful. However, when—play it by the book, search under exigent circumstances, and emergency Title II wire are all used in the same scenario—one of these things is not like the others. Evidence can be deemed inadmissible if agents fail to obtain proper warrants and court orders. In real life, play it by the books means closely following procedures and protocols and not taking unnecessary chances. 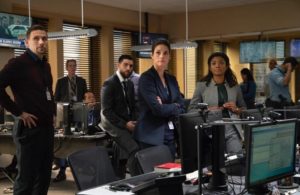 There were also several instances where major creative compromises were made. For instance, the very first scene where a woman who was supposed to meet SA Maggie Bell for coffee was abducted. NYPD was on site. Maggie arrives. The overworked NYPD detective hands the investigation over to and walks away. What? That’s not how it works. I understand why Maggie needed to be involved in the case, but where was the federal jurisdiction?

Collecting DNA from the nails and paws of a dead dog was another unique twist. I’m not an expert on the subject, but unless the rottweiler seriously mauled the suspect, it’s highly unlikely any DNA evidence could have been collected. One more point needs to be addressed; the speedy timeframe for DNA analysis, another challenging expectation. A hit was made in less than a few hours. In real life, it would take weeks if not months before investigators received results.

Another issue was at the end of the episode. Many police departments are using body cameras, but not the FBI. And body cameras only record, they do not transmit video in real-time.

(Spoiler Alert) The episode ends with SAC Mosier announcing that she’s retiring. Noooo! She cannot retire. She’s a role model. Dana, Maggie, and Kristen are helping to recruit women to join the FBI. I hope a deal can be worked out to have Sela Ward return next season. I’ll be back. Don’t be so surprised. Despite my honest observations, I meant it when I said; I like this show!