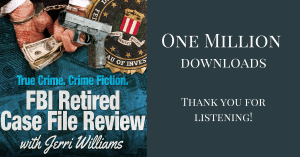 What began as a marketing tool to introduce myself to potential readers of my crime fiction, has morphed into a mission to assure the public of the integrity and independence of the FBI.

When I decided to produce a podcast where I would interview retired FBI agents about their cases and careers and review crime fiction, I thought it was a good niche idea. There were already lots of great true crime podcasts, but none that exclusively featured FBI agents and the crime fiction and true crime books they had written. I also wanted to discuss what books, TV and movies often get wrong about the FBI. But would I be able to attract an audience for the show? I posted my first episode to iTunes Apple Podcast on January 22, 2016. And now, the podcast has one million downloads!

At the end of that first day, Libsyn (podcast hosting service) statistics indicated that the episode had been downloaded thirty-three times. Over the next four weeks, after promoting the show on LinkedIn, Twitter, Facebook and Google Plus, the weekly stats slowly inched up to a few hundred downloads. Steady progress. I was pleased. Then on February 15, I received an email from a stranger congratulating me on making the #1 spot on iTunes Apple Podcast’s New & Noteworthy. I tapped the purple podcast app on my cell phone and I was pleasantly surprised to see my show’s cover art. 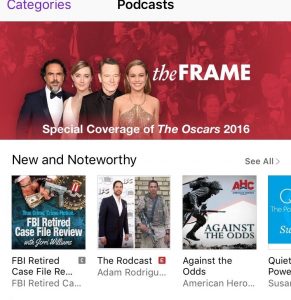 iTunes Apple Podcast featured the show for eight days and, during that time, my weekly download totals dramatically increased to between 20,000 – 25,000. After the promotion ended, the numbers dropped significantly, but never lower than 5,408 downloads a week. There is no doubt, the discoverability boost from being featured on the front page of New & Noteworthy was the major factor in the initial success of the show. However, during the last year I’ve also worked hard to improve my interview and production skills and, as a result, FBI Retired Case File Review has continued to grow organically to more than one million downloads.

I find my retired agent guests by looking for interesting cases and agent profiles featured in The Grapevine, the monthly publication of the Society of Former Special Agents of the FBI, and from following the much-welcomed suggestions received from listeners. I then use my investigative skills to identify and locate the case agents. I also search the Internet for articles about retired agents and I, of course, reach out to my FBI friends and former co-workers and ask them (beg them) to share their fascinating stories and insights. I primarily conduct interviews by telephone. Many retired agents don’t use Skype (and don’t want to learn). I schedule interviews based on the days and times my colleagues are available. I want participating on the show to be as convenient as possible for them. I try to have at least five interviews recorded in advance, because the most stressful part of producing a weekly podcast is the fear of missing a week because a guest had to cancel or reschedule. Every Monday, I edit that week’s episode (approximately 3 hours of editing for every 1 hour of conversation). On Tuesday and Wednesday, I create the show notes using the photos and articles I gathered as I was preparing for the interview and record my intro and outro remarks. I upload the completed episode late Wednesday evening so that it’s available for listeners from around the world to enjoy on their Thursday commute and while doing weekend chores and adventures. I’m honored to share these FBI stories with the public. It’s ironic that I now devote the majority of my time to producing the podcast instead of writing my next FBI crime novel. Podcasting makes me happy.

Here are the 5 lessons I’ve learned from hosting and producing a weekly podcast:

#1.  iTunes Apple Podcast can lead the audience to your podcast, but can’t make them drink.

Luckily for me, enough of the people who had been introduced to the podcast via New & Noteworthy were thirsty for what I was serving. Unlike most true crime podcast, FBI Retired Case File Review is more like the TV show 20/20 than Dateline, less violence and more variety. I search for interesting cases and agents to feature and believe the unique content attracts new listeners each week. Would I like even more listeners? Sure, and that’s now happening organically.

Listeners looking for podcasts featuring true crime have been able to find FBI Retired Case File Review amidst all the other podcasts out there with similar content. Why? I think it’s the kick ass cover art (big props to Robert Dieters of Jack Rabbit Design). It immediately signals to potential listeners what the podcast is about. The cover art is eye-catching and, don’t you think?

#3.  You need to prepare for success.

The very first episode was recorded on my iPhone using the voice memo app. Seriously. I held out my cell and my guest and I spoke out loud. I thought it sounded great at the time, but now know that the audio quality for those initial episodes was poor. I’ll never know how many more of those initial New & Noteworthy listeners would have stuck around if I had been prepared for their sudden and unexpected visit. Your first episodes don’t have to be perfect, but make sure the audio is as good as you can make it. I believe the only thing that saved me in those early days was great content.

#4.  You need to be prepared for the time commitment success brings.

I started podcasting because I thought it would be easier than blogging. I was wrong. No one warned me about the time it takes to locate and schedule guests, and that it would take several hours to edit out the distracting uhms, uhhs, errs, long awkward pauses and mistakes from recordings. So listen up, I’m warning you now—producing a quality podcast can be a major time suck.  A worthwhile endeavor, but a huge commitment nonetheless.

#5.  Being featured on New & Noteworthy was a fluke.

There was no “mythical unicorn magic” that got my podcast featured on New & Noteworthy. The truth is I knew nothing about New & Noteworthy before I ended up there. It was never a goal. I didn’t hold back three episodes to post at one time. I didn’t ask friends and family to throw up a bunch of reviews. But there is no doubt—being featured on the front page of New & Noteworthy was a game changer for FBI Retired Case File Review. I’m proud that I’ve been able to grow the show to more than one million downloads, but I’ll be forever grateful iTunes Apple Podcast chose to feature my podcast.