Unbelievable is an eight-part Netflix series about a young woman who is accused of lying about a rape. Later, two female detectives investigating a spate of eerily similar attacks in a multi-jurisdictional sexual assault investigation, develop information that identifies additional victims of the same rapist. Watch the trailer. It’s a disturbing show, made even more troubling because it was inspired by true events. During the series, one of the detectives demands to know when it comes to victims of rape, “Where is the outrage?” You’ll find yourself asking the same question.

There is not much to critique about Unbelievable. The police procedures are portrayed accurately and the relationships between the female detectives, their colleagues, and the male FBI agent who helps them expedite DNA testing and access ViCAP (Violent Criminal Apprehension Program) data, feel sincere. In the last episode, the FBI agent interviews the convicted rapist gain insights to use in other sexual assault investigations. 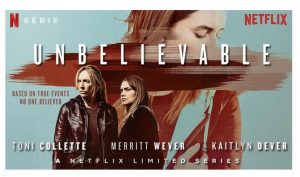 I highly recommend you watch Unbelievable streaming on Netflix. However, since I’ve never investigated a sexual assault case, I reached out to retired agent Jane Mason (Episode 174) for her opinion on the TV series. Upon her retirement, Jane and another retired agent formed a private investigations company where several clients were survivors of sexual assault. She had a lot to say.

From Jane Mason:  Unbelievable was very difficult to watch.  I can only imagine what it was like for the crime victims to live through the experience.  Throughout the series, I simply could not stop thinking that the perpetrator might have been stopped before he brutalized the second and third victims depicted in the show.  We can all second-guess the steps of the initial investigators, but one thing is clear, the course of the lives of the sexual assault survivors is forever altered because of the brutal crimes they experienced.

Successful sexual assault investigations require devoted and tenacious law enforcement officers to work in conjunction with the crime victims.  These are personal, emotional investigations and crime victims need to be treated fairly and with compassion with a focus on achieving justice based on sound investigation practices.  Just as in any type of case, any and all witnesses need to be interviewed and all the evidence needs to be collected.  Leave no stone unturned is an excellent motto for criminal investigators.

Somehow, sexual assault cases are in an isolated category.  Sexual assault survivors face so many challenges and, despite so many people trying to achieve improvement in the system, there has been little, if any, change.

Statistics from RAINN (Rape, Abuse & Incest National Network), the nation’s largest anti-sexual violence organization, show that 77% of all sexual assault survivors do not report the crime. Every 73 seconds, another American is sexually assaulted. And every 9 minutes, that victim is a child. Meanwhile, only 5 out of every 1,000 perpetrators will end up in prison.

Earlier this year, two at-home evidence collection kits were launched so that sexual assault survivors could save their own evidence because 77% decide not to report the assault.  Disclaimer:  One of the kits was mine, the PRESERVEkit, which is based on the expertise I developed during my 28 years at the FBI.

Survivors often do save their own evidence and bring it to the nurses who perform the rape kit.  Other times, survivors come forward later with items they saved.  But a firestorm erupted with cease and desist orders and death threats against the at-home kit founders.  Apparently, we had disturbed the status quo.

We, as a society, need to start moving forward if we really want to support sexual assault survivors. Unbelievable is a warning about what happens when we don’t.