Recap:  A serial bomber appears to be targeting Wall Street’s elite. Maggie and OA search for a suspect who seems dead-set on revenge, while Dana deals with, a cocky profiler brought in to consult on the case

There was a powerful premise running throughout this week’s episode. I was pleasantly surprised that a TV cop show would address it. The overall message was revenge, but the deeper theme was about women in leadership positions, particularly women in law enforcement.

I thought the episode was well written and acted. Yes, I noted the usual issues. However, because I’m also trying to recruit more women to consider the FBI and law enforcement in general as a career, I’m going to concentrate my reality check on this one topic of women in the FBI. I believe it’s that important. In today’s FBI if a female agent encounters a privileged misogynist with sexist attitudes like the profiler who challenged every decision made by Dana Mosier, his inadequacies would be noted as individual and not institutional. Respect for the chain of command is crucial for the Bureau’s adherence to tried and true protocols and policies. Dana should have sent him packing back to the Behavioral Analysis Unit (BAU) in Quantico. The recap described him as a cocky profiler. He wasn’t cocky. He was just a dick. But SAC Mosier is tough and the boss. “I make the tactical calls.” You tell him, Dana!

It is perplexing to me that law enforcement is still considered a non-traditional career for a woman. Being a successful woman in the FBI and other local, state, and federal agencies, requires the usual policing skills and street smarts, but above all else, it takes determination and confidence in your abilities. 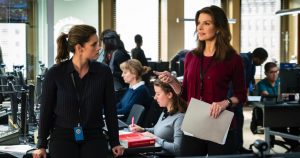 So what does this have to do with episode 15? The FBI CBS female characters, Dana Mosier, Maggie Bell, and Kristen Chazal present these qualities on every episode. During SAC Mosier fictional raise up the ranks, she would have, no doubt, been challenged along the way. I could easily imagine someone asking her if she was dropping off her husband on her first day at the FBI Academy, but not Special Agent Maggie Bell. By the time Maggie arrived at Quantico, women like Dana had already smoothed the way for her. That’s the more progressive FBI from which I retired. I had female bosses, I trained males agents, and those agents came to me for my opinion and advice on investigative strategies. With female agents making up only 20 percent of the workforce, there were often times that I was the only woman in the room. However, I personally did not feel that my gender played any role during most of my career.

If I’m honest, I must admit that my early days in the Bureau were challenging. I joined the FBI at a time when everyone was still getting used to female agents. I could share some war stories. Fortunately, in spite of my shaky beginnings, it had no effect on what I was able to accomplish during my career. When you’re trying to make a name for yourself and create a positive reputation in a job where there are very few women, you know that you have the responsibility of saying and doing things that are going to help the women coming up behind you.

I invite you to meet a real-life Dana Mosier next week on FBI Retired Case File Review – Episode 156 when I interview retired FBI Agent and Senior Manager Lauren Anderson. During her career, she was one of the first women on an FBI SWAT team, the FBI’s representative in Paris where she directed the Bureau’s engagement in France, Monaco, and twenty-two African countries, and she was the Assistant Special Agent in Charge of the International Terrorism Branch of the New York Joint Terrorism Task Force.

Lauren sounds like a tough boss too, right? You’ll have to listen to the episode to learn how she did it.