Recap: When a judge and her daughter are murdered after she sentenced a man to life in prison, Maggie and OA search for the killer behind a possible retaliation. Dana has a vested interest in this case as she has a history with the victim.

Review:  SAC Dana Mosier reveals her tender side when she shares that she “goes way back” with the murdered judge. She is determined to identify the persons responsible and bring them to justice quickly. Maggie discovers that a member of her New Agent Class (NAC) is working undercover at a bar where the judge was seen just before she was killed.

For educational purposes, I made a few reality check notes:

This episode suggests that an undercover agent is in charge of the case. However, that is not correct. The case is run by a case agent. That’s not to say that a case agent can’t pick up a phone and pretend she is someone else or during a couple of short meetings introduce herself using a fictitious identity. However, a significant undercover role is not played by the agent assigned to investigate the case. Instead, another agent is selected to assume that part of the investigation. I understand that the Gina Pratt character played the role of UCA and case agent as a composite character. However, in real life, Maggie and OA would also be speaking with the case agent. 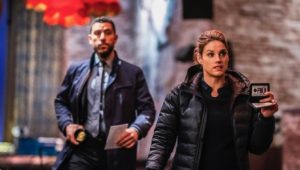 DNA analysis only works if the suspect’s DNA is on file in the Combined DNA Index System (CODIS). The offender index contains DNA profiles of individuals convicted of violent crimes. Unlike the fingerprint identification system, CODIS does not maintain DNA profiles of the general population. Identifying DNA on the body of the judge’s daughter would only be possible if the bar owner’s DNA was already on file from a previous run-in with law enforcement.

FBI analyst Kristen Chazal’s pay grade and job description do not authorize her to go for a ride in a car with violent drug dealers, even if promised a fun night on the town. An analyst would never be asked to play an undercover role such as this.

The UCA character Gina was well written and acted. The friendship between her and Maggie was a beautiful thing. The FBI understands how crucial it is for there to be a lifeline available to reach out to the UCA on a regular basis and monitor the UCA’s mental fitness to continue in the assignment. The UCA is also asked to return to Quantico every six months for an evaluation and stress test. Being an undercover agent is a voluntary assignment, but not everyone who raises his or her hand is chosen. Intensive training and role-playing seminars determine an agent’s suitability. A UCA is required to undergo mental health evaluations.

Even so, undercover agents report that it is easy to start empathizing with their subjects and developing genuine concern and affection for the targets of the investigation. In FBI Retired Case File Review episode 19 retired agent Jesse Coleman talked about these feelings during his case review of the two years he went undercover as a drug dealer buying cocaine and heroin from made members of the Sicilian mob. Here’s an edited excerpt from his interview:

“Month’s later we were going to trial. We’re wondering, why are they going to trial? We have more than 200 recorded conversations with them. We couldn’t figure out why. So, I go on the stand and start to testify. I see the two guys looking at me. They stop the trial, and they plead guilty. Why? Because even at that point, they thought they were my friends. Our relationship had gone on so long that, even once they learned I was an FBI agent, they didn’t believe that I would actually testify against them. How did  I feel? I felt depressed immediately after the arrest. It’s a natural psychological reaction. I felt that I stabbed my friends in the back. Of course, shortly after, I realized that they’re criminals. They weren’t my friends. The undercover role at times becomes almost real to you.”   —  Retired Agent Jesse Coleman – FBI Retired Case File Review – Episode 19

(Spoiler Alert) The episode concludes with the arrest of the former lover of the judge’s daughter. I have to admit that I’m questioning if this investigation would continue to investigated by the FBI and prosecuted federally once it is learned that the judge wasn’t killed due to her position as a District Court judge.

The scene where Gina was pulled over at gunpoint was a bit much? Yes, she lied to Maggie and OA, but was the need to use deadly force justified? She might be fired for policy and procedural infractions regarding inappropriate relationships with a subject, but I’m not sure what crime she committed. Nevertheless, the FBI would be responsible for investigating Gina’s actions and requesting that the United States Attorney’s Office file charges against her. Poor Gina.

To learn more about how an agent is evaluated for an assignment as an undercover agent and monitored throughout the assignment, listen to the entire interview with retired agent Jesse Coleman and the other 18 podcast episodes featuring interviews with undercover agents. Click the drop-down FBI violation menu in the website footer and click on Undercover Agents.