Recap:  When an alt-right provocateur is murdered after giving a speech at a university in New York City, Maggie and OA investigate the school’s more extreme political groups and rely on OA’s sister, Amira, a student, for help.

When I watched the preview for this episode, I wondered where the story would venture. I was aware that hate speech itself is not a crime— the FBI is sensitive to the importance of freedom of speech and other civil liberties in the United States.

When they arrived on campus, OA and Maggie probably did not have jurisdiction to initiate an investigation into the murder of the university’s guest speaker. They had no intelligence indicating the involvement of a hate group, nor was the victim a member of a protected group. Additionally, according to the civil-rights section on the FBI website, state and local law enforcement agencies, handle the vast majority of bias crime investigations throughout the country.

However, a drive-by where armed men shoot at FBI agents. . . Yeah, that’s a crime. OA and Maggie also established jurisdiction to open a case once they determined the arson/murder was committed by a suspected domestic terrorism organization. 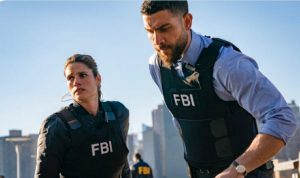 During the episode, Maggie states that she’ll enter the group’s safe house and, “Plant the wire and get out.” Not so fast, Maggie. That’s not how it works. It’s not that simple. There are rules and procedures that must be followed first. In the 1970s, the Supreme Court declared unconstitutional the practice of wiretapping radical domestic groups without first obtaining court approval, even if they were considered dangerous to national security.

The Court held that wiretapping of domestic radicals who have no foreign ties can be done only by obtaining a warrant just like the ones used by the FBI to investigate and wiretap organized crime. And, will someone remind SAC Mosier that warrants are prepared by the U.S Attorney Office, with the investigating agent as the affiant, but warrants must be approved by a judge.

Of course, I have to address the newly created database of enemies. What? Where does analyst Kristen find these search tools? If such a resource actually existed (it doesn’t), some people might be more careful about what they say on social media. Haters beware!

Another solid episode of FBI.