Recap:  Maggie and Dana struggle to find justice for victims murdered by a serial killer who left a ghoulish mark on all of his victims, while the mayor limits the investigation in order to prevent economical loss.

This week’s episode featured a serial killer. I must confess that I hate serial killers and usually don’t watch or read anything about them. However, I thought the matter was handled well by our FBI CBS crew, more investigatory, less grisly and gory.

At the beginning of the show, Maggie volunteers the FBI to take over the lead in the creepy case of a serial murderer who puts makeup on the faces of his victims and takes “artistic” photos of them before disposing of their bodies. The NYPD is okay with handing over the case, but SAC Dana Mosier is upset that Maggie has busted the offices budget. Uh. Nope. No law enforcement agency, local, state, or federal would be concerned about dollars when lives are at stake. It’s a good plot complication, but it would never happen in real life. 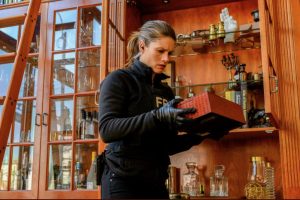 Plus, serial killings are still local murders. Homicide investigators at a police departments where the deaths occurred would not give the cases to the FBI and walk away. The FBI’s involvement in serial killer cases is complicated and multi-layered. The Bureau’s role has evolved under federal law since 1994 when the Bureau was authorized to investigate violent crimes against interstate travelers and serial murders specifically in 1998. The FBI may investigate serial killings only when requested to do so by an appropriate law enforcement agency. The Bureau is also authorized to provide a variety of support services, from laboratory and behavioral analysis to crime statistics collection and the sharing of criminal identification and history information through our longstanding services and systems. However, we work these cases with the cooperation and contributions of our local partners. In this case, it Maggie and OA would be working with the NYPD.

By the way, according to an FBI report on the topic, in real life, serial murder is a relatively rare event, estimated to comprise less than one percent of all murders committed in any given year.

The conflict between SAC Dana Mosier and the Mayor’s office was good stuff. Who doesn’t love to watch turf war conflicts? But, the FBI would never allow the local Mayor to dictate how they would handle an investigation. Now a police chief or commissioner might feel pressure from the Mayor, but the FBI can’t be taking orders from local public officials. It’s best not to get too cozy. Who knows? The FBI may end up opening a case against a few of them. Awkward.

Despite these creative compromises made to dramatize a FBI serial killer case, our agents, Maggie and OA,  did another fine job cracking the case.

To learn more about how the FBI investigates serial killers like the one featured in episode 17, listen to Episode 075: Mary Ellen O’Toole – Serial Killers, Sexual Sadists. You’ll find additional interviews on the topic under serial murders in the FBI violations drop down menu in the footer of this website.