During Episode 198: Going Undercover, Living the Dream, retired agent Jimmy Gagliano mentioned a crime drama about the FBI. He said it was called C-16: FBI. I didn’t remember it. So I googled it and learned that it was on TV for one season from 1997 to 1998 and that all 13 episodes had been uploaded to YouTube. The show starred Eric Roberts as the squad supervisor with a strong distrust of management and FBI Headquarters. Actors Angie Harmon and Morris Chestnut played rookie agents on the squad. Curious, I watched the first show, got hooked, and watched four more episodes. I knew immediately why it only lasted one season. It was dark, too real. I surmise that someone from FBI Headquarters Public Affairs and/or a retired FBI agent was a technical advisor or writer for the show. The FBI agent characters were flawed, cynical, and bitter. Guess what? I kept my shoes on. I liked it. 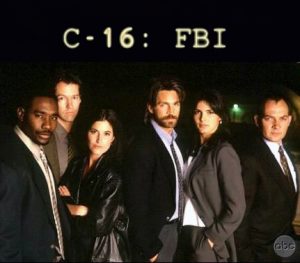 There were a few stereotypes. It annoyed me that the friends of the black male new agent were all from the “hood” and that the divorced veteran female agent was on the verge of losing custody of her son because she worked too much (not a good image for recruiting more women agents). But the relationship between the female new agent and her training agent was spot on. He barely tolerated her. That conjured up fond memories. Haha!

The agents all worked on a “major crimes” squad, which allowed them to cover all FBI violations. During the episodes I watched, the squad worked a hostage matter, a child abduction, and tried to save a rogue undercover agent from crashing and burning. When comparing C-16: FBI to the current FBI show on CBS, the older drama had one huge advantage. The show was serialized. The agents didn’t have to solve each case and tie everything together with a pretty bow by the end of the episode. But alas, like the rogue UCA, the show eventually crashed and burned. I guess the audience wanted more clean cut heroes to root for. Not me. I love dark and troubled FBI characters. That’s the kind of stories and books I write. I enjoyed the show so much that I’m going to binge the rest of the season. I hope you’ll check it out too.  You can watch C-16: FBI here.