Former agent Asha Rangappa served in the FBI for three years. She was assigned to the New York Division and specialized in counterintelligence investigations. In this episode of FBI Retired Case File Review, Asha Rangappa reviews Russian interference and how the FBI’s counterintelligence agents, along with the entire intelligence community, is addressing the threat. During her time in the Bureau, Asha Rangappa assessed threats to national security, conducted classified investigations on suspected foreign agents, and performed undercover work. She gained experience in intelligence tradecraft, electronic surveillance, interview and interrogation techniques, and the use of firearms and deadly force. After leaving the FBI, Asha Rangappa was an Associate Dean at Yale Law School. She has also taught National Security Law and related courses at Yale University, Wesleyan University, and the University of New Haven. Currently, as a Senior Lecturer at the Yale University’s Jackson Institute for Global Affairs, Asha has published op-eds in The New York Times, The Washington Post, and The Wall Street Journal, among others, and has appeared on NPR, BBC, and several major television networks. She is an editor for Just Security and is currently a legal and national security analyst for CNN. You can find more about Asha on her website AshaRangappa.com. 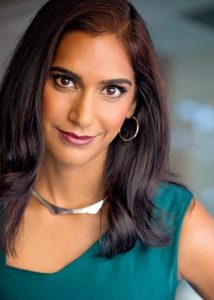 “Part of the subversion is not just to get us to fight with each other, but to cause us to lose faith in our institutions and our own government. First and foremost among them is law enforcement and the courts.”

The following are links to FBI website and newspaper articles about counterintelligence and Russian interference:

USA Today – 11/16/2018:  Russia’s Internet Research Agency may have been behind Facebook election meddling

Los Angeles Times – 2/16/2018:  Who is the California man who just pleaded guilty to unwittingly aiding Russian interference in the 2016 election 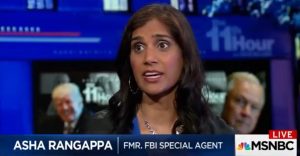