On March 18, 2016, on his award-winning website, The Audacity to Podcast, Daniel J. Lewis wrote a blogpost titled There is No #1 in iTunes Podcasts “New and Noteworthy.” The piece generated a robust discussion in the comments section, including whether or not being featured in the New and Noteworthy section really makes a difference in the success of a show. 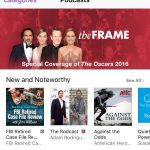 At the time, my podcast—FBI Retired Case File Review— had just been featured on iTunes on the front page, in the first spot, on the first row— (#1?) in New and Noteworthy for all podcast categories. But I didn’t weigh in to the conversation. I decided to wait six months and report back with real data. So, did being featured help?

Short answer – Absolutely! Long answer – But it’s complicated. Let me take you back to the beginning.

I decided to produce and host a podcast where I would interview retired FBI agents about their cases and careers and review crime fiction and crime dramas, a true crime and crime fiction show. Great idea, right? I posted my first episode to iTunes on Saturday, January 22, 2016. At the end of the first day, I checked my Libsyn statistics and the episode had thirty-three downloads. By the end of the week, the total rose to 82. Over the next four weeks, after promoting the show on LinkedIn, Twitter, Facebook and Google Plus, the weekly stats slowly inched up to  totals of 133, 170 and 355 downloads. I was happy. Then on February 15, I received an email from a stranger congratulating me on making the #1 spot on iTunes’ New and Noteworthy. I tapped the purple podcast app on my cell phone and I was pleasantly surprised to see the show’s cover art.

That week, the podcast episodes were downloaded 19,634 times and the following week 25,454 times, an average of 3,500 downloads a day. Based on those numbers, FBI Retired Case File Review was also ranking in Top Charts where additional listeners would find it. I quickly grew addicted to the adrenaline rush of knowing, thanks to iTunes, people were discovering the show.

However, on March 1, when the podcast cover art was moved off the front page, the downloads quickly shifted downward. Like a junkie, I began to experience withdrawal. How far down would my audience drop?

Here are five things I learned from the experience:

#1.  iTunes can lead the audience to your podcast, but they can’t make them drink.

Luckily for me, enough of the people who had been led up to the podcast were thirsty for what I was serving. The weekly downloads total, which had only been a few hundred before being featured on New and Noteworthy, never dropped lower than 5,408. Currently, I’ve maintained an average of 6,300 weekly downloads for the past 6 to 8 weeks, the majority of these listeners found FBI Retired Case File Review from New and Noteworthy. Would I like even more listeners? Sure, but that’s now happening organically.  (See update: As of 9/4/2017 episodes are downloaded an average of 21,000 times per week)

Someone at iTunes decided that FBI Retired Case File Review would be featured on the front page of iTunes, in the first spot, on the first row— (#1?) in New and Noteworthy for all podcast categories. Why? I think it was the kick ass cover art (big props to Robert Dieters of Jack Rabbit Design). The show premise is also unique, and the interview content entertaining and informative, but the cover art is eye-catching, don’t you think?

#3.  You need to prepare for success.

The very first episode was recorded on my iPhone using the voice memo app. Seriously. I held out my cell and my guest and I spoke out loud. I thought it sounded great at the time, but a small handful of listeners didn’t. Even now, if you look at the mostly 5 star reviews, the initial ones complain that the audio quality was very poor. It’s fixed now. But I’ll never know how many more of the New and Noteworthy listeners would have stuck around if I had been prepared for their sudden and unexpected visit. Your first episodes don’t have to be perfect, but make sure the audio is as good as you can make it.  I believe the only thing that saved me in those early days was great content.

#4.  You need to be prepared for the time commitment success brings.

I’m a crime fiction writer. “They” say authors should blog to find and engage with readers. I started podcasting instead because I thought it would be easier than blogging. I was wrong. No one warned me about the time it takes to schedule guests and that it could take several hours to edit out the distracting uhms, uhhs, errs and long awkward pauses from recordings. So listen up, I’m warning you now—producing a quality podcast can be a major time suck.  A worthwhile endeavor, but a huge commitment nonetheless.

#5.  Being featured on New and Noteworthy is a reward.

That’s what Daniel said in his aforementioned blogpost. Or was it in the comments?  Anyway, he was right. There was no “mythical unicorn magic” that got my podcast featured on New and Noteworthy. The truth is . . . I knew nothing about New and Noteworthy before I ended up there. It was never a goal. I didn’t hold back three episodes to post at one time. I didn’t ask friends and family to throw up a bunch of reviews. But, my download numbers don’t lie. There is no doubt—being featured on the front page of New and Noteworthy is absolutely a big deal!

As for whether or not FBI Retired Case File Review was #1 in New and Noteworthy, I’m not sure it really matters. All I know is I’ll be forever grateful iTunes chose to feature the show. 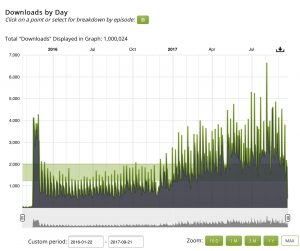